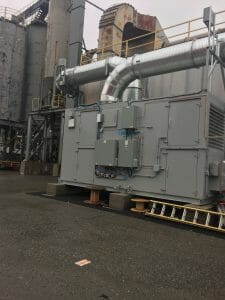 Becoming green, Construction Edelweiss, which works with many government ministries, puts itself in front of the competition image wise and cost wise.

Located in Wakefield (Quebec), this asphalt plant is equipped of a drying and dust collector system. The heat is recovered from the dust collector to preheat the air for the drying system. The company should save more than 130,000 liters of heavy fuel oil. A monitoring system will measure and validate the estimated savings. since flow and temperatures probes are settled on the exchanger to record data regularly. Aéronergie will be able to calculate the real energy saving of Construction Edelweiss.