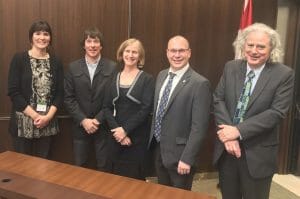 On October 3rd 2017, the multi partie caucus on climate change organised a series of activities on the parliamentary hill to inform and raise awareness for the deputies and senators of all political allegiances, on issues related to climate change and adaptation measures.

Recently, a group of 80 Canadian searchers grouped under the name of “Dialog for a green Canada” have produced, an independent scientific report, requested by Natural Resources Canada about the energy transition to a low-carbon economy.